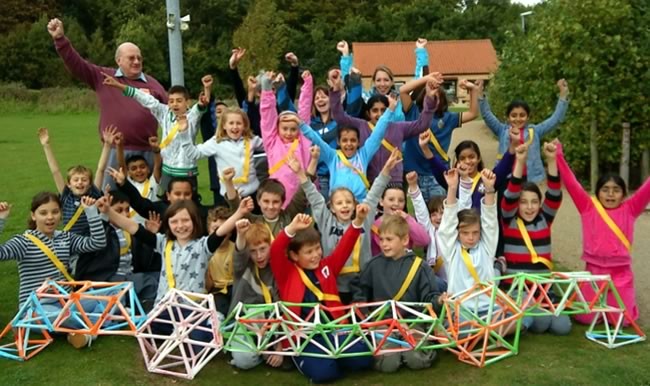 The 2006 awards were chosen with the experience of judging the first round of awards in 2005 to build on, but with their resulting projects at the time mostly still in the early stages of progress.

There were significantly more applications for an award this time, from all regions in the country, and with a more diverse range of projects, and the standard was high. The successful projects have been coming to fruition throughout the present year.

have helped develop a primary school programme “Kids United”. 240 children in 4 diverse Primary Schools have been engaged in interfaith exchanges and activity days ( e.g. art, music, sport, computers) and used various media to record and share their experiences, including a colourful newspaper. A new secondary school programme “My home town” is in progress, with a mix of youngsters interviewing a mix of adults. Read the report.

are creating and helping to fund a Virtual Learning Environment linking local educational and faith-community and inter-faith websites, due to be available to schools from this September and more widely from January 2008. This will increase the facility for sharing inter-faith resources and conducting dialogue between young people and across generations.

have involved their Student SACRE in amending their schools’ Sex and Relationships Education. Faith perspectives on these topics have arisen from student discussion within and among different faith-groups, and this has been incorporated in a series of DVDs for use in all Secondary Schools and in support of Governor training, excerpts being highlighted at NASACRE’s AGM this year. Read the report.

responding to the impetus of their Youth SACRE, have sponsored a residential interfaith weekend for young people exploring the ideas of respect, acceptance and transformation, and recorded on DVD as a resource for RE and for the Youth Service and Youth Parliament. Read the report.

project, building on an initial interfaith event in November 2005, focussed on presenting a large exhibition for four days in March 2007, on the theme “Belonging to Faith Communities”, involving pupils from both LA and supplementary religious schools in preparation and displays. Its DVD is being circulated. A third event is now being planned and a Young People’s Faith Forum is under discussion. Read the report.